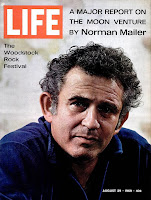 "You know, Norman," said Lowell in his fondest voice, "Elizabeth [Hardwick] and I really think you're the finest journalist in America." ... Still Lowell now made the mistake of repeating his remark. "Yes, Norman, I really think you are the best journalist in America."
The pen may be mightier than the sword, yet at their best, each belong to extravagant men. “Well, Cal,” said Mailer, using Lowell’s nickname for the first time, “there are days when I think of myself as being the best writer in America.”
The effect was equal to walloping a roundhouse right into the heart of an English boxer who has been hitherto right up on his toes. Consternation, not Britannia, now ruled the waves. Perhaps Lowell had a moment when he wondered who was guilty of declaring war on the minuet. “Oh, Norman, oh, certainly,” he said, “I didn’t mean to imply, heavens no, it’s just I have such respect for good journalism.”
“Well, I don’t know that I do,” said Mailer. “It’s much harder to write”—the next said with great and false graciousness—“a good poem.” 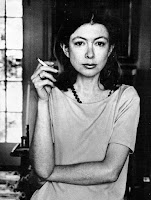 On the day Norman died I looked up an interview he gave the Los Angeles Times in 1971. He had talked about the nerve it takes to get up every morning and say this is the way it happened. He had talked about writer's block as a failure of ego.
I had saved this interview because it offered a lesson. The lesson was that doing what he did was no easier for Norman than it is for most of us. He knew the risks. But he kept on taking them.
Eight years after that interview he took a risk, in The Executioner's Song, that might have seemed insurmountable. The Executioner's Song began as a project put together by Lawrence Schiller, and was widely referred to as "the Gary Gilmore book." This "Gary Gilmore book" was understood in a general way to be a reflection on a life that would have seemed to yield no further meaning. Gary Gilmore, at the time he was executed for murder in 1977, had been in and out of prison for 22 of his 36 years. He had a highly developed con style that caught the national imagination. The visibility of that style guaranteed that the execution itself would be covered to a pitch at which the coverage itself might seem the only story.
What Norman could make of this apparently intractable material was unclear. Many of us expected a return to familiar territory, ground he had mined before. Instead he wrote a novel, a thousand-page novel in a meticulously limited vocabulary and a voice as flat as the horizon, a novel that took for its incidents and characters real events and real people. The Executioner's Song was ambitious to the point of vertigo, and the extent of its ambition becomes clear at the end of the first chapter, where a curious sentence appears. Gary Gilmore's cousin Brenda has gotten a call from the penitentiary at Marion saying that Gary is coming home - by way of St. Louis, Denver, Salt Lake - to Provo. "With all the excitement," this sentence reads, "Brenda was hardly taking into account that it was practically the same route their Mormon great-grandfather took when he jumped off from Missouri with a handcart near to a hundred years ago, and pushed west with all he owned over the prairies, and the passes of the Rockies, to come to rest at Provo in the Mormon Kingdom of Deseret just fifty miles below Salt Lake."
Against the deliberately featureless simple sentences of The Executioner's Song, sentences that slide over the mind like conversations at a K-Mart, the complexity and length of this sentence is a chill, a signal that the author is telling us a story of some historical dimension. In fact this author's sentences never got long or short by accident, or because he was in a hurry. Where he put the comma was a question of considerable concern to him. Gary Gilmore's cousin Brenda may not have been taking into account those prairies, those passes of the Rockies, but the author was, and, in that single sentence, the terms of the novel laid themselves out: a connection would be attempted here, a search for a field of negative energy linking these events to the place itself. In a landscape where every road runs into the desert or the interstate or the Rocky Mountains, people develop a pretty precarious sense of their place in the scheme. People get sick for love, think they want to die for love, shoot up the town for love, then move away, forget the face. People commit their daughters, then move to Midway Island. Gary Gilmore's true love Nicole got committed the first time at 14. Nicole's sister April was "a little spacey" on the night in Provo when she went to the Sinclair station and the Holiday Inn with Gary and he seemed to kill somebody.
The Executioner's Song, then, was to be a novel of the West, and the strongest voices in it would be those of women. Men tend to shoot, get shot, push off, move on. Women pass down stories. "Well, I am the daughter of the very first people who settled in Provo," Gary Gilmore's mother said to herself when Gary was 22 and sentenced to 15 years for armed robbery in the state of Oregon. She said it again on the July morning in 1976 when her niece Brenda called to say that Gary was under arrest in Utah on murder one, two counts. "I am the granddaughter and great-granddaughter of pioneers on both sides. If they could live through it, I can live through it." This is the exact litany which expresses faith in God west of the 100th meridian. I can think of no other writer with the character to have risked this much and brought it home.
Eingestellt von jay um 10:53