saison qui chante saison rapide je commence:
Beginnings are hard. Sappho put it simply. Speaking of a young girl Sappho said, You burn me. Deneuve usually begins with herself and a girl together in a hotel room. This is mental. Meanwhile the body persists. Sweater buttoned almost to the neck, she sits at the head of the seminar table expounding aspects of Athenian monetary reform. It was Solon who introduced into Athens a coinage which had a forced currency. Citizens had to accept issues called drachmas, didrachmas, obols, etc. although these did not contain silver of that value. Token coinages. Money that lies about itself. Seminar students are writing everything down carefully, one is asleep, Deneuve continues to talk about money and surfaces. Little blues, little whites, little hotel taffetas. This is mental. Bell rings to mark the end of class. He has a foreskin but for fear of wearing it out he uses another man's when he copulates, is what Solon's enemies liked to say of him, Deneuve concludes. Fiscal metaphor. She buttons her top button and the seminar is over. 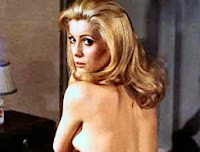 Jours: If you asked her Deneuve would say Take these days away and pour them out on the ground in another country. Parts: Seminar meets MonWedFri. Parts of time fall on her and snow wanders slowly through the other afternoons. Deneuve sits in her office looking at the word irony on a page. Half-burnt. You have to wonder. Sappho, Sokrates, is it all mental? These people seem bathed in goodness, yet here come the beautiful dangerous white rapids beating onto them. Knife of boy. Knife of girl. Knife of the little knower. Where is the ironic work that picks threads back from that surface into another design underneath, holding rapids in place? Evening fills the room. Deneuve buttons her coat and closes the office door behind her. 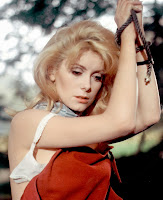 Staircase is dim and filthy, small dirty deposits on each step. She heads for the Metro. What would Sokrates say. Name the parts. Define each name. Deneuve is turning names and parts over in her mind when she realizes she has ridden the train four stops in the wrong direction. Climbs back up from the platform, stairs are filthy here too, must be a punishment. Hip slams hard into the metal arm of the turnstile. Red sign pasted on it says NO EXIT. Sound is far away. All around her strange lamps burn brightly and human tongues press the night. 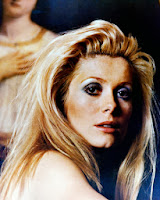