Sir, the closing scene of my most pleasant and important mission has now to be performed. And permit me to hope that, long after every timber in her sturdy frame shall have perished, the remembrance of the old Resolute will be cherished by the people of the respective nations. I now, with a pride totally at variance with our professional ideas, strike my flag, and to you, sir, give up the ship. Mit diesen Worten übergab Captain Henry J. Hartstein die HMS Resolute am 30. Dezember 1856 an Admiral Sir George Seymour. Die Amerikaner hatten das im Packeis gescheiterte Schiff gefunden und wieder aufgerüscht. Hat den US Congress als Geschenk der Freundschaft an die Engländer richtiges Geld gekostet. Die Resolution zur Wiederherstellung der Resolute im Kongress war sehr wortreich: 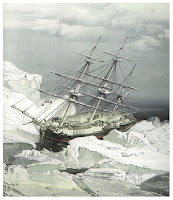 Whereas it has become known to Congress, that the ship 'Resolute', late of the navy of Her Majesty the Queen of the United Kingdom of Great Britain and Ireland, on service in the Arctic Seas in search of Sir John Franklin and the survivors of the expedition under his command, was rescued and recovered in those seas by the officers and crew of the American whale-ship, the 'George Henry', after the Resolute had been necessarily abandoned in the ice by her officers and crew, and after drifting still in the ice for more than one thousand miles from the place where so abandoned—and that the said ship 'Resolute', having been brought to the United States by the salvors at great risk and peril, had been generously relinquished by them to Her Majesty's government.